Here you will find the data on yachts, sailors and owners kept by the Dehler 30 one design class association

SAILORS OF THE DEHLER 30 ONE DESIGN OFFSHORE CLASS

The background that Kalle developed the Dehler 30od after more than 50 years of Dehler yacht building makes it even more special to share this experience and the great boat with the family. From Dehler for Family ;-)

One boat, two generations. Kalle Dehler has been active in racing for over 50 years and has been shaped by times of sailing icons like Willy Kuhweide and Dennis Conner. Thomas Dehler in contrast has grown up with racing opponents like Peter Burling and Boris Hermann, who has shed a new light on German offshore sailing. Together with this impulsive mix of experience and fast-moving Generation Y, the two could compete at Kiel Week 2020 with the only German offshore class, the Dehler 30od. The Dehler 30od can connect generations and demands everything from both of them: action, excitement, strategy and, to some extent, composure.

“I do like going fast,” Corson confesses, while also admitting to taking fast cars around a racetrack a time or two.

Ben Corson and his partner Marta Hansen have for many years enjoyed sailing and racing a wide diversity of boat types, from a Flying Scot they keep on Deep Creek Lake in western Maryland to a series of larger and faster boats they sail on Chesapeake Bay. This latter group includes a J/125, an Open 6.50, and a Dragonfly 25 Sport trimaran. All have had their particular strengths within each genre of sailing – an offshore-capable keelboat, a lively sportboat, and a fast multihull, with the common element for all being high speed under sail. 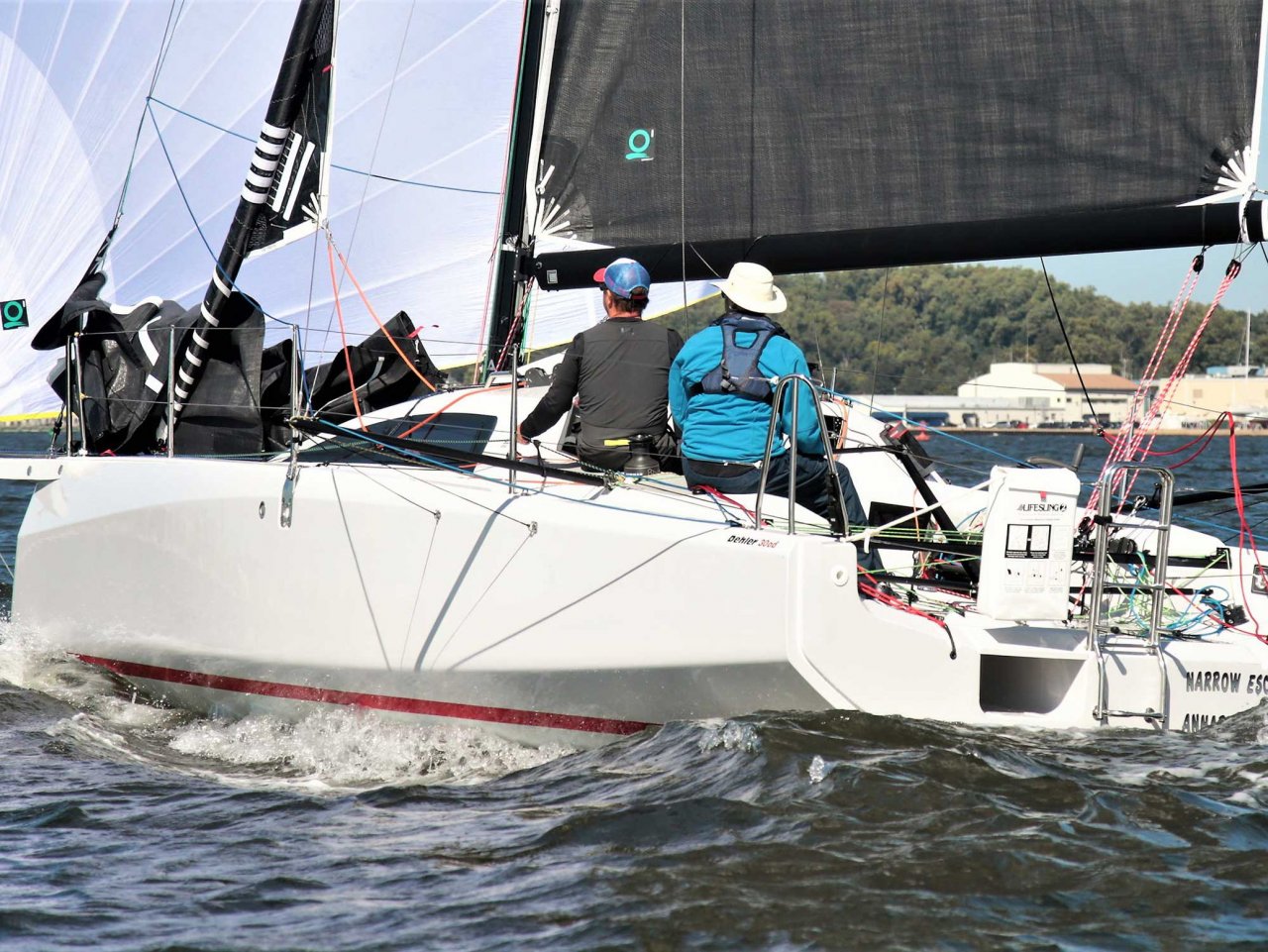 Team Speedsailing, consisting of Oliver Schmidt-Rybandt, Felix Hauss, Otto Timm, Julia Röttger and Martin Kringel, has been involved with passion and know-how from the very beginning - from development to first race victories.

Oliver has years of offshore experience and skippers in his home area Warnemünde just like Otto and Martin normally Volvo 60 Racer, but they all also shine with one or the other Dehler 30 one design triumph. Julia, normally a regular crew on Speedsailing's VO60s and also at home on small boats like the J70, is gaining her first experience in doublehanded mode in the Dehler 30 one design. Felix and Oliver won together the first German open in Kiel.

Oliver Schmidt Rybandt to the Dehler 30od:  "We are proud and grateful to have been so closely involved in the development of this boat. After the first thousand miles, relief has also set in. The boat is fast in all conditions, has above average control and looks beautiful. We have fun training, racing and vacationing."

From the beginning with passion and know-how - from the development to the first race victories.

Team Aether is training and racing on a double handed campaign, together with some full crew racing too. Day by day the team is falling in love with the little rocket, preparing for the 1st ORC European DH Championship, organized by HORC in July 2021, which will be hosted in Greece, in parallel with Aegean 600 Race the new non-stop 600nm sailing race!!!

Jerry Petratos has been offshore racing for the last 30 years. Having sailed 15 years on a Nicholson 33 and the last 12 years as member the Farr 52 «Optimum Yacht Racing Team», he is now enthusiastic for racing with the new Dehler 30 OD. Evi Delidou, member of the Greek National Team in Gymnastics in her early youth, discovered offshore sailing during the last 7 years and became a great fan of it. She have raced on board several teams and types of boats from 30 feet club racing to 52 feet performance racing (also a crew member of team Optimum the last 2 years) and now is the owner of the Dehler 30 OD «Aether»

For the last years I have been sailing in the Melges 20 Class, but will now enter into the new Olympic double-handed mixed offshore class. We are preparing our season of sailing with The team ”No Xcuse”. Team name based on that there is no excuse to not do your best in order to perform.

After doing competition in sailing since I was ten years old, I have spent the last years sailing Melges 20 mostly in inshore regattas.

Two years ago me and one of my crew member sailed our first Double Handed inshore/offshore race aproxímate 100 nautical miles. We had to upgrade quite a lot on the Melges to meet the safety regulations. No autopilot and no possibility to reduce sail size. It was tough, but it went well. A dream to sail offshore racing and article about the new Dehler 30 OD caught our Interest. After dreaming about new sail adventures me and my wife contacted the Swedish Dehler agent in order to find out more. Two weeks later we entered Rostock by ferry in order to test sail the new Dehler. We bought our first Dehler 2006 (a brand new Dehler 29) and our expectations were high. The boat exceeded our expectations by far! A fantastic boat with a great sailing performance. One month later the boat was ordered! We now look forward to receive our new boat in order to prepare for the 2021 season. Our first training session is planned to the Class training camp in April in Rostock. My mixed sailng partner at the national championship Will be Pia Lobry. She has sailed the transatlantic race some 10 years ago, and we raced against each other in the Hobie class.

History:
I have been sailing since I was 7 years old and the life at sea is my passion. Greatest achievement is sailing the world cup of Fun board in windsurfing for BMW Surfpartner team in 1984-85 and a silver medal in team (6th individually)at the Production Fun board world championship in France at Brutal Beach in Six Fours 1986. After that I stopped my professional windsurfing carrier and started at university and finalized 1992 with a Mast of Science in Mechanical Engineering with the focus area on Logistics. I have continued sailing since then making some results such as silver medal in Hobie cat 16 Swedish championship i 2010 and 19th place in European Laser Masters 2015.
For the last years I have been sailing in the Melges 20 Class, but will now enter into the new Olympic double-handed mixed offshore class. We are preparing our season of sailing with The team ”No Xcuse”. Team name based on that there is no excuse to not do your best in order to perform. We use a simple strategy: 1. Clear target, 2.Written plan how to reach target, 3. Endurance, 4. Discipline (because you will nit always be motivated) and finally 5. No Xcuse! (fight to the end and do not blame somebody else if you do not reach your target). Target 2021? To perform well in the Swedish double-handed mixed Offshore championship.

No Xcuse! fight to the end and do not blame somebody else if you do not reach your target.

We wanted to set an example and support the promising project of a German one design class in the offshore sector. The possibility to train in home waters and to participate with the Dehler 30 one design in short hand regattas like the Baltic500 or the Silverrudder is very attractive for us. And who knows, maybe we will even sail the boat of the new Olympic mixed offshore class.

The Offshore Team Germany around team manager Jens Kuphal, Michael End and their two skippers Robert Stanjek and Morten Bogacki finishes the successful German mini-campaign and relies on the Dehler 30 one design for the sportive development. Jens Kuphal, who has observed and supported the development of the 30 one design from the very beginning, sees the racer-cruiser, which recently won the "European Yacht of the Year 2020" award, as the perfect training boat to drive forward the German offshore ambitions for The Ocean Race 2021/22 and the Olympic Games 2024 in Marseille.

Team Sexy Beast consists of brothers Anders and Peter Juul. We have both sailed most of our lives from Optimist dinghy to crew onboard various keelboats. In 2017 we bought our first boat, a X-79. After 3 years of quite succesfull sailing, the X-79 was replaced by a Dehler 30OD, which we received in mid august 2020. Our plans are primarily for doublehanded races. Currently we have 9-10 weekends booked for racing in the 2021 season. Mostly races in Denmark, but we will be coming to Germany for the Baltic 500 and probably the campionship in september.

A passionate team of amateurs - Dehler 30 one design sailing and thus one-size-fits-all is something different than following the ORC circus. In the end, we succeeded in performing boats as a hobby sailor in this area with our M34, and success was achieved.If Thomas S. hadn't said there is something new, let's do it together, things would have turned out differently, but we haven't regretted anything! What we like best is the versatility of the boat, so that we can also go on holiday with it. We will certainly not be at the really big events, but we will continue to spread the idea of this beautiful boat class on the Baltic Sea.

"Move On Up", the boat is located in Le Crouesty Arzon harbor. Xavier Bénéteau is the owner (nothing to see with the French builder!). He should particpate to some races in Britanny for the first year with its boat.

MOVE ON UP IN ACTION OFFSHORE RACER #27

After successfully participating the Mini Transat 2017, I decided to take a little break. No own boat any more, only short action in different classes. With interested and open eyes I followed the development of the Dehler30 onedesign class. When Hanse Yachts AG asked me to be involved in the official trailer for the boat, afterword’s I was finally falling in love with this classy concept. With the second win of the X-79 championship, I left sailing between different classes without my own boat and ordered GER 22 "Calle Dr. Antonio Jorge Aguiar". The name for the boat comes from a whim that developed during the stopover of the Mini Transat 2017 in Gran Canaria.

Formerly a big champion but today only a fast sailing lover!

Will participate to some regattas in Brittany.